The Journey to Jewel Changi Airport

The Jewel Changi Airport is being hailed as an architectural marvel, a groundbreaking new must-see filled with wonder and delight, a place so majestic it doesn’t even seem real, and a  “futuristic space that’s set to make the airport a destination.”

At Neoscape, we can confirm that all of this is true – and we ought to know. We are honored to have been working with the visionaries behind this project since the very beginning. Way back when the seven-story rain vortex waterfall was just a dream and a sketch.

It all began when the Changi Airport Group rallied some of the world’s greatest architects to present ideas for an entertainment and retail complex to link to the three passenger terminals in the Changi Airport in Singapore. Already voted the best airport in the world several times over, they were looking for a concept that would meet and exceed that reputation.

Moshe Safdie, internationally renowned architect, and his team were among those who competed for the project. Their design was bold – featuring multiple elements never before seen in any structure in the world.

Neoscape has been working with Safdie Architects for 18 years – so we were excited when they approached us with an opportunity to convey their vision to the decision-makers in this unprecedented competition.

“We have worked with Neoscape for over 15 years to develop images and films of our projects,” says Jaron Lubin, principal-in-charge of the firm. “We have created a close, collaborative working relationship with their team to help us deliver high end presentations, often with very tight deadlines.” 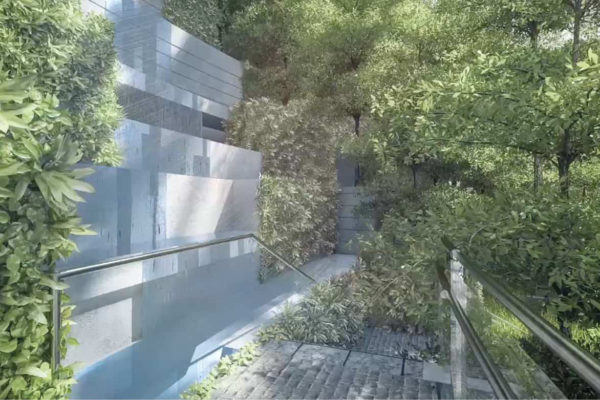 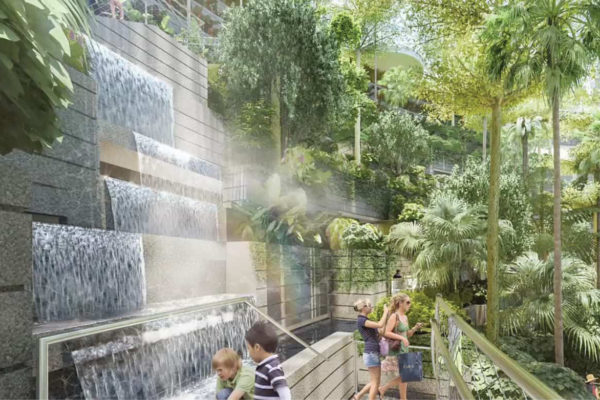 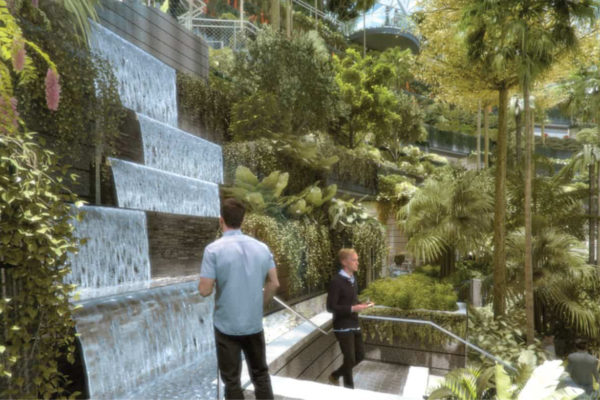 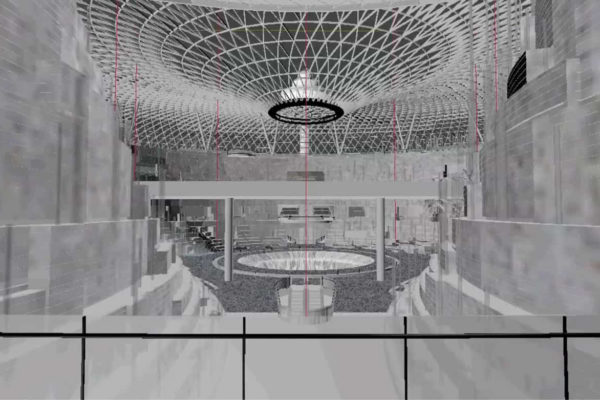 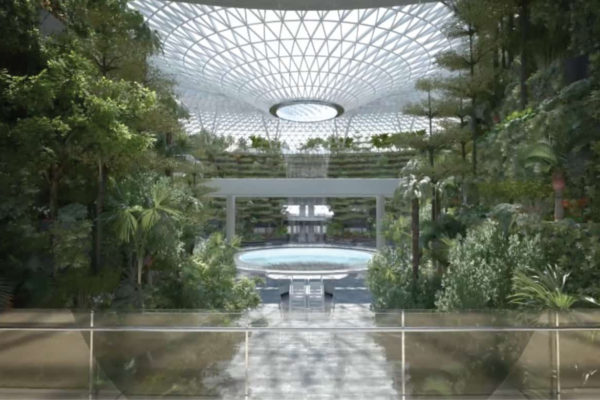 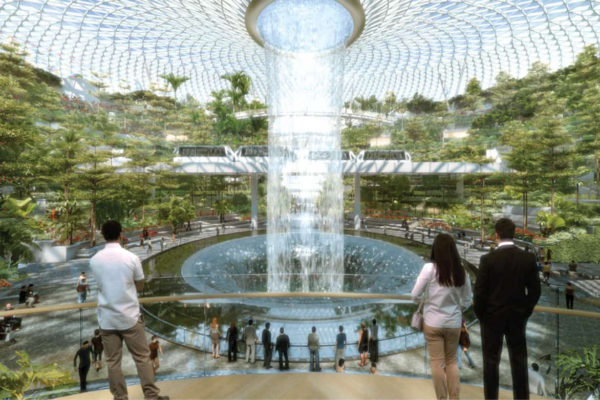 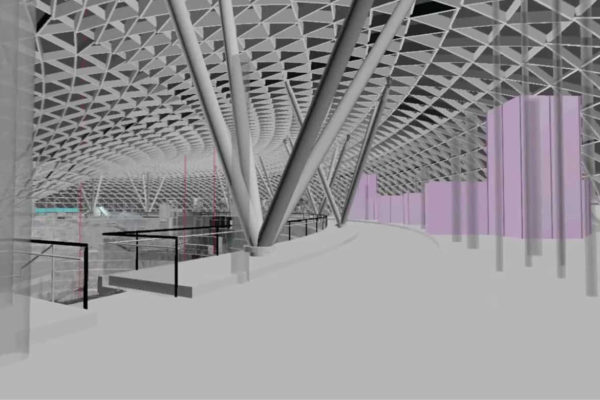 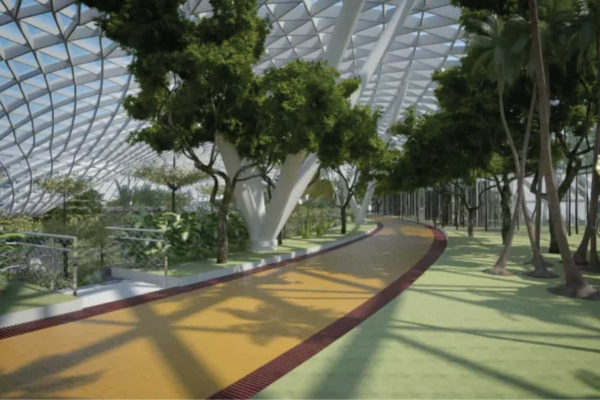 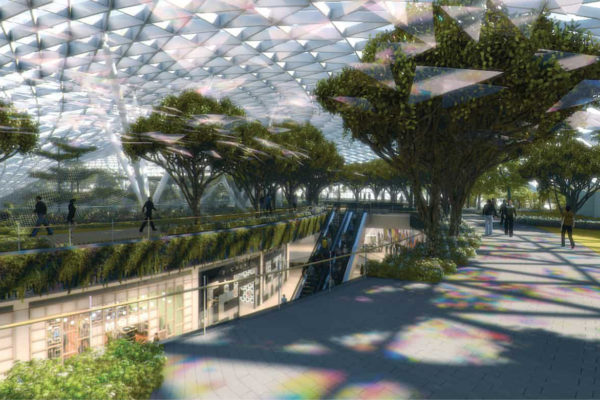 “Project Jewel posed a formidable challenge,” says Moshe Safdie. “How to convey in rendering a space of a scale, heretofore not conceived, filled with a variety of plant-life, rendering some sense of realism not only to architecture, but to nature. The greatest attention had to be devoted to plant species and their juxtaposition in order to get the correct feel of the space.”

We created photorealistic 3D renderings and a two-minute animated film showcasing the immense glass dome and other features of the structure. But the way we looked at it, we were bringing a dream to life – a dream that was unique in every possible way. 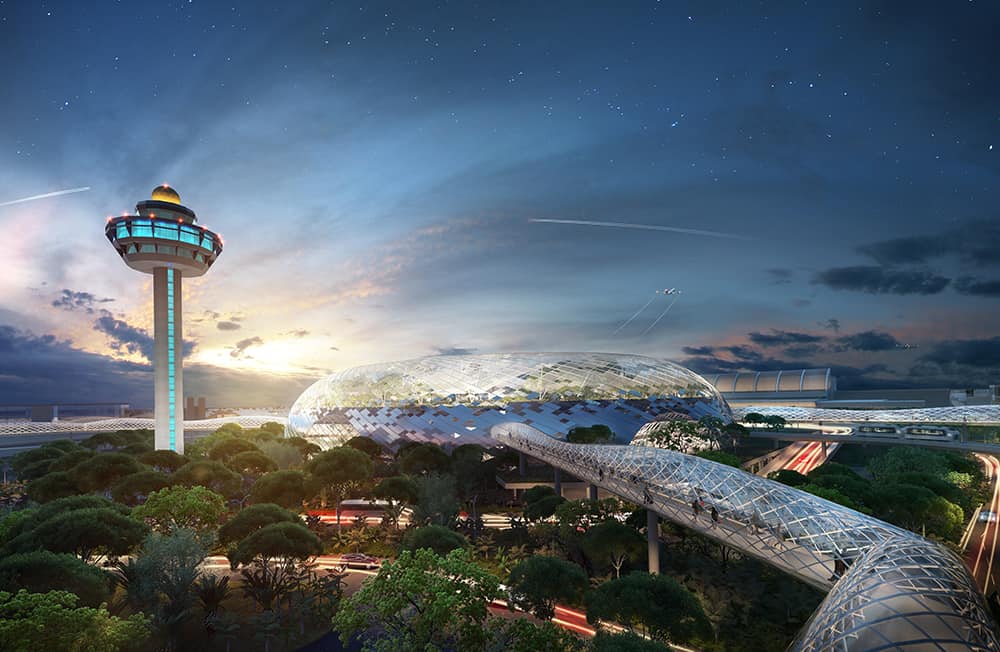 Needless to say, the Jewel concept from Safdie Architects was selected as the winner by the Changi Airport Group. From there, Neoscape partnered closely with the firm to breathe life into the project at every stage. After the competition, Safdie Architects spent many months refining their concept, keeping Neoscape up to date on their progress throughout.

When principal in charge, Jaron Lubin, deemed the time was right, the Neoscape 3D and Film teams gathered with the Safdie design team to walk through every inch of the plan and concept as it exists today. 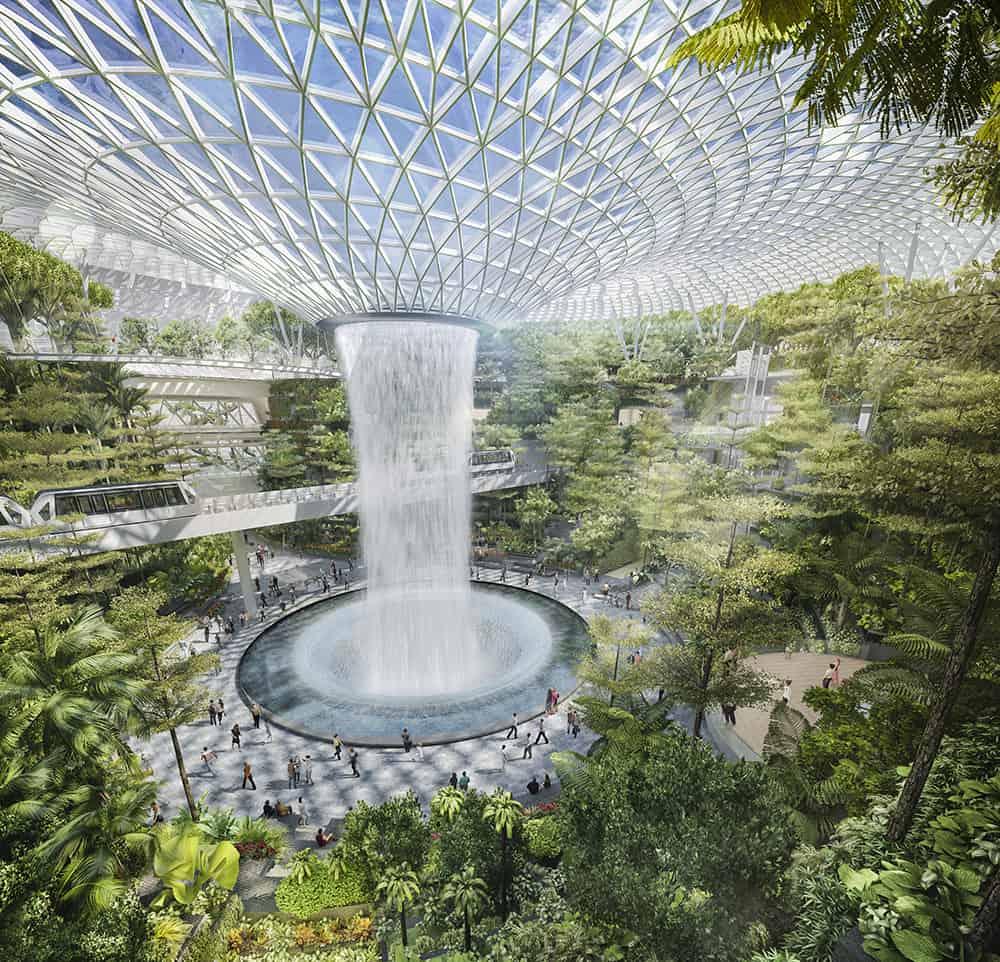 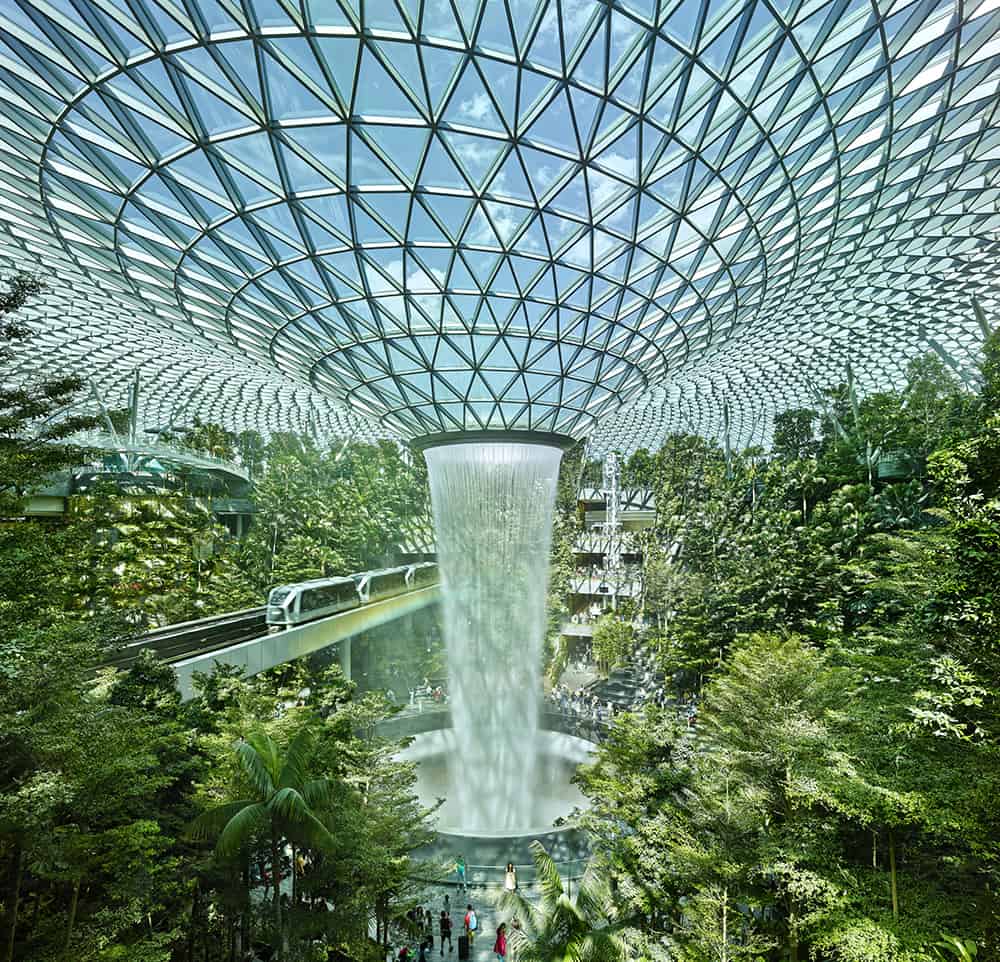 It was extremely important that all of the artists understood every aspect of the design, down to the materials being used for each section, the kind of lighting that would illuminate the structure, and even the construction process. Again, capturing the landscaping and vegetation accurately in the renderings was a top concern.

Every stage of the project – from proof of concept to material selection and lighting design to the final film visualization, including a green screen shoot – presented the team with unique, unprecedented challenges. This project scope is where we thrive; embracing challenges methodically and problem solving at every turn.

And in case you’re wondering about how the vegetation turned out: every single plant in the landscape is exactly what PWP Landscape Architects designed. Down to the species, placement, and size – anything else would have let the project down. Perhaps even better, we’ve been told it’s the most realistic plantlife our clients have ever seen.

According to Moshe Safdie himself: “The greatest compliments to the Neoscape team were people’s exclamations when they saw the first set of photographs of the completed project. They ranged from, ‘exactly like the renderings, how could it be?’ and in some cases, ‘usually renderings fool you and look better than the reality.’ In this case, the reality and the renderings were equally compelling. By all accounts, the Jewel renderings are not only the most realistic, but the most communicative of the ones done for us by Neoscape.” 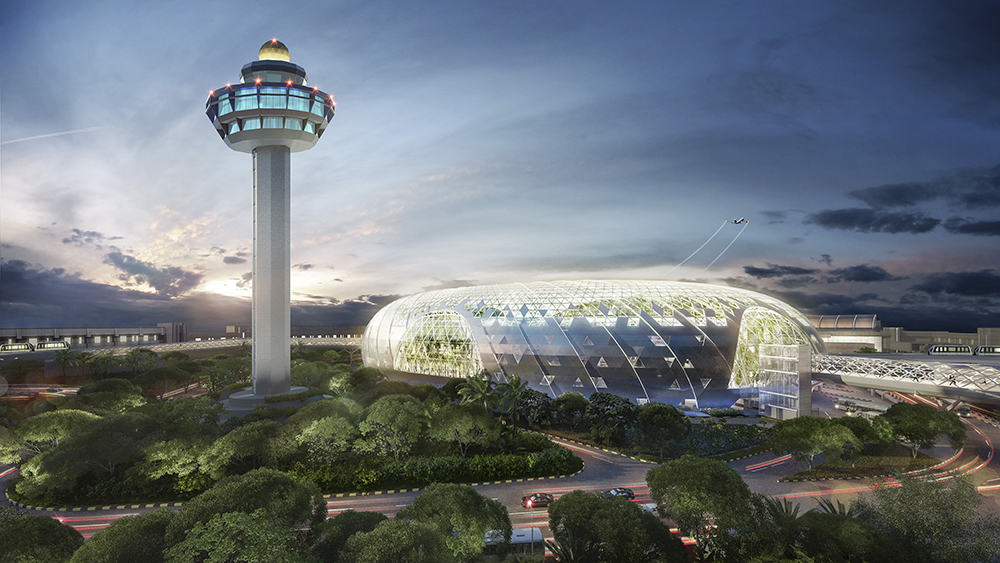 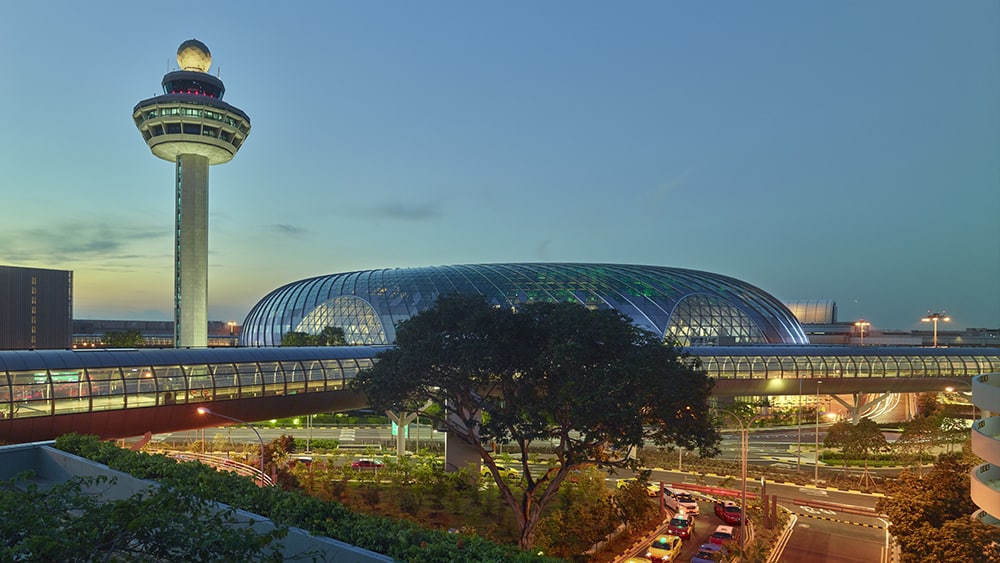 The Journey Is the Destination at Jewel Changi Airport

Now, over seven years after we first began working on this project, Neoscape is thrilled to see the real Jewel Changi Airport open for business for the first time.

“There is nothing more exciting and gratifying than to see our work in real life and to hear that our clients are satisfied with what we’ve created,” said Carlos Cristerna, head of the RadLab and lead on the project. “At Neoscape, we get emotionally attached to the work we do, always, but especially when we have clients like Safdie, who truly partner with us. When we can freely share opinions, ideas, and creative decisions – that’s when we do our best work.”

The Jewel is about making the journey into a destination in its own right, and we are immensely honored to have been a part of such a revolutionary project from the very beginning.

Institutional Fundraising Films: Are You Using Them the Right Way?

Institutional Fundraising Films: Are You Using Them the Right Way?